Arsenal boss Mikel Arteta will be without at least three players for this weekend’s north London derby against Tottenham at the Emirates Stadium. The Gunners have enjoyed a hugely impressive start to their Premier League campaign, winning all but one of their seven matches to date, and will be the favourites to claim victory over their bitter rivals when they come to blows once again on Saturday afternoon 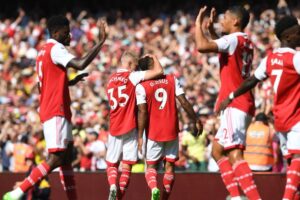 Arsenal cruised to a routine win over Brentford in their last outing before the international break and will be desperate to clinch another welcome haul of points against Tottenham, who currently sit third in the Premier League table and have not lost a game since the beginning of the season. However, Arteta will be forced to contend with a minimum of three absences from his matchday squad due to injuries, with Emile Smith Rowe among those on the treatment table.

The England youth international has emerged as an important cog in the machine for Arsenal over the last few seasons but will be sidelined on Saturday with a groin issue that has been plaguing him since Arsenal’s defeat to Manchester United. He recently underwent surgery to correct the problem and is expected to remain out of action until at least December if no further complications arise over the coming weeks.

Arsenal will also be without long-term absentee Mohamed Elneny, who picked up a serious hamstring injury at the end of August. The Egyptian midfielder is some way off achieving full fitness as things stand and is set to remain unavailable until the start of next year at the very earliest.

Arsenal will be without at least three players against Tottenham this weekend.Cedric Soares is another player to have been struck down with an injury ahead of Saturday’s game against Tottenham, with the Portuguese full-back suffering a knock against Brentford earlier this month. He is now reportedly nursing a fresh issue and will not be in contention to feature on the weekend as a result.

There are also a number of possible absentees within Arsenal’s ranks, although some players may be available to take to the pitch against Tottenham if things go well over the next few days. Oleksandr Zinchenko was prevented from representing Ukraine with a minor calf injury over the international break, but Arsenal are said to be hopeful that he will be able to return to action on Saturday.