Arsenal are keeping tabs on Manchester United striker Marcus Rashford, whose contract at Old Trafford expires next summer, as per Football Insider.Rashford has found form for the Red Devils this season, scoring three goals in seven appearances under new manager Erik ten Hag.

There had been speculation over his future in the summer, with a potential departure touted but he remained at Old Trafford.The forward’s contract runs out in the summer of 2023, but Manchester United do have the option of extending it for a further year.However, the Red Devils are yet to take up that option, and it has encouraged Arsenal to keep a close eye on developments. 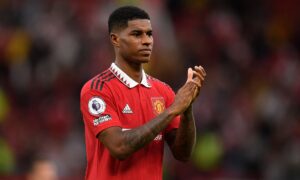 The Gunners reportedly registered their interest in Rashford before signing Manchester City’s Gabriel Jesus for £47 million.Mikel Arteta’s side remain interested in the English attacker, who is set to become a free agent next summer as things stand.Rashford has been at United for the entirety of his career having risen up the youth ranks.He has made 310 appearances for the Red Devils, scoring 96 goals and creating 60 assists.United boss Ten Hag has seemed eager to keep hold of Rashford, claiming that “United control the situation”

It is quite surprising that Rashford is still only aged 24 given how long it feels he has been one of Manchester United’s talismen.The English forward made his debut at the age of just 17, scoring a brace in a 5-1 win over UEFA Europa League win over Midtjylland in 2016.Ironically, Rashford followed that mesmerizing performance up with a double in his Premier League debut against Arsenal in a 3-2 victory.He quickly became a talisman for the Red Devils and one of the Premier League’s most exciting young strikers.The forward’s best campaign came in 2019-21 when he scored 22 goals in 44 appearances.

He was soon being called up to the England national team and has earned 46 international caps, scoring 12 goals.However, last season was one to forget for Rashford as he disappointed with just five goals in 32 games.Hence, rumors started creeping in that all was not well in the Englishman’s camp and that he may desire a move away.Yet, under Ten Hag he has bounced back and is impressing under the Dutch tactician’s tutelage.Manchester United would be making a huge mistake to allow the forward to leave and especially to join a Premier League rival such as Arsenal.The Gunners are the current league leaders and hold a nine-point lead over sixth-placed United.