Arsenal are plotting to raid Juventus in a £100million double transfer swoop for Dusan Vlahovic and Fabio Miretti in the January transfer window. 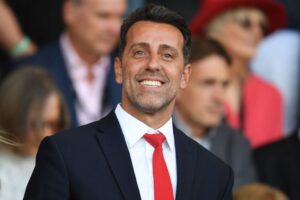 The Gunners signed five new first team players in the summer spending over £100million for a second successive year. Technical director Edu was unable to satisfy all of Mikel Arteta’s transfer demands with Arsenal failing to secure a deal for Aston Villa Douglas Luiz on Deadline Day, whilst a new winger was also unattainable.

The north London outfit currently sit top of the Premier League after carrying their strong pre-season form into the new campaign with new signings Gabriel Jesus and Oleksandr Zinchenko having a huge impact on Arteta’s team already. Fabio Vieira, Marquinhos and Matt Turner have started to show promising signs as well after initially having to settle for a place on the substitutes bench.

Edu is set to try and make up for the missed opportunities of signing a central midfielder and forward in the summer by plotting a £100million double transfer swoop for Juventus stars Dusan Vlahovic and Fabio Miretti, according to Calciomercatoweb. The Gunners had previously tried to sign Vlahovic back in the January transfer window before the Serbian striker opted to sign for Juve in a £66million deal.

Arsenal may have signed Jesus in the summer, but the Brazilian’s ability to play on the wing could allow Vlahovic to take the starting no.9 spot with Jesus and Bukayo Saka playing either side of the Serbia international, if he were to make the move to the Emirates Stadium. Miretti is considered a bright talent and has already become a regular starter for Massimiliano Allegri’s side at just 19-years-old.

Since Arteta took over at Arsenal there’s been a clear transfer plan to sign young up-and-coming players, in an effort to develop and show faith in younger players to perform and reach their potentials. The Old Lady have not enjoyed a strong start to the season after picking up just two wins in their opening seven Serie A games, and should their form not turn around it could see Vlahovic and Miretti be tempted to leave the club.