Arsenal target admits being flattered by their interest but he prefers their rivals. Jesper Lindstrom has emerged as the latest player catching the eyes of Arsenal from the Bundesliga.

He plays for Eintracht Frankfurt and helped them win the Europa League last season. 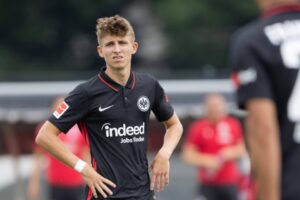 His performance in the competition caught the eyes of several clubs around the world.Arsenal wanted a winger in the last transfer window after allowing Nicolas Pepe to join Nice on loan.

They couldn’t get one before the window closed and they could revisit that issue in the January transfer window.Lindstrom emerged as their main target in recent weeks. However, the man himself has spoken about their interest.

“When you play regularly in a club in one of the biggest leagues in the world, and you help win the Europa League, then there must be clubs that are watching. It’s a huge confidence boost to hear that such a big club is watching me. But I honestly don’t know if it’s true.”

Asked if he is an Arsenal fan, he adds: “I’m a Liverpool man,” with a laugh.

He didn’t expressly say he wouldn’t accept an offer from Arsenal, which means we can still get him if we push to add him to our squad.

A January move could cost us more money than if we wait until the summer, because Frankfurt will not want to lose a key player mid-season.