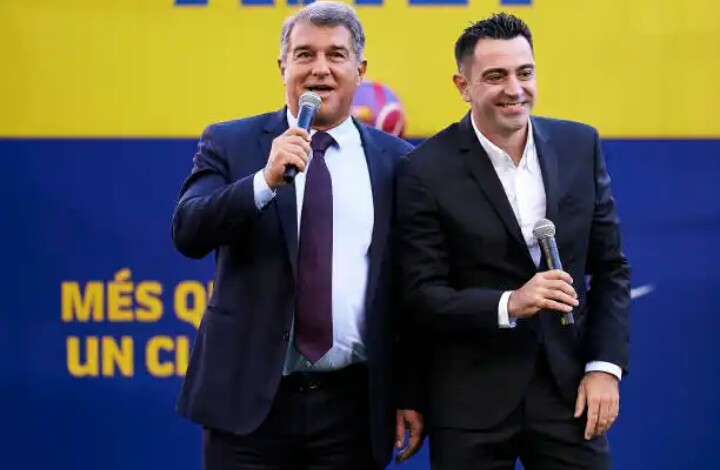 Barcelona have prioritised the contract renewal of teenage midfield sensation Gavi after securing economic approval for the transfer window.

The 17-year-old enjoyed a remarkable breakthrough campaign with the Blaugrana this year, joining Pedri, 19, in helping to revolutionise the side’s midfield.

The talented teenager is however out of contract at the Camp Nou next summer and the club are keen to tie him down to a new long-term deal.

Widely regarded as one of the best young players in the world, Gavi made 47 appearances for Barca last season, scoring twice, and establishing himself as a regular starter in the midfield for Xavi Hernandez’s side.

The combative midfielder has also been capped 10 times for the Spanish national side.

Barca’s well-documented financial problems have led to complications in tying down their star players to new contracts but the club’s members voting in favour of the sale of Barca’s future merchandising and television rights will help in the short-term.

The vote allows current club president Joan Laporta to sell 49.9% of the club’s official Barca Licensing and Merchandising subsidiary and a further 25% of its La Liga broadcasting rights over the coming seasons.

Whilst it remains to be seen what benefit specifically that will have on the future of the Spanish club, it is suggested that the sales could potentially bring in around £600million in the long-term – but hampering its potential for growth.

A report from Diario AS now claims that the club’s priority after securing their new investment will be to renew the contract of Gavi.

It is stated that Gavi will sign a four-year contract extension with a release clause of €400million to ward off potential suitors, while he will be handed a salary on a par with the club’s central defender Ronald Araujo.

Club president Laporta said after the votes were passed: “Activating these levers will move us out of intensive care into a ward where we can receive more treatments, and soon leave the hospital.

“We want a Barca that can compete head to head with those state-owned clubs, or those clubs owned by billionaires,” Laporta said in his address.

Barcelona are planning to build their midfield around Gavi and Pedri, with Sergio Busquets likely to be phased out in the seasons to come with Franck Kessie signed this summer from Milan. Frenkie de Jong is currently in negotiations to join Manchester United.