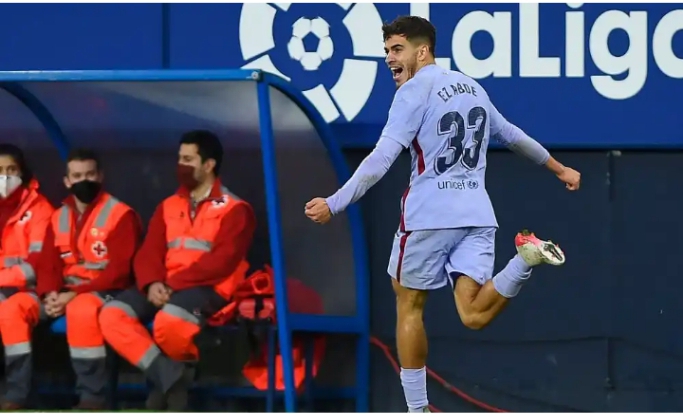 Heading into the summer transfer window, Barcelona have crucial decisions to make over the futures of several players on their roster.

Given the financial situation at Camp Nou, player exits will be critical to generate funds as well as create space for new faces on the wage bill.

Out-of-favour stars like Samuel Umtiti, Clement Lenglet and Martin Braithwaite are almost certain to depart, while there could be exits for some young prospects.

Another youngster tipped for a bright future whose future has been speculated about is Ez Abde.

The 20-year-old winger joined the Blaugrana last summer from Hercules CF and has made a huge impression with his performances for the B team and the senior side.

Abde caught the eyes with his displays for the first-team setup in the early days of Xavi Hernandez’s tenure,

with his blistering pace and dazzling dribbling ability standing out. He featured ten times for the senior side, scoring one goal.

Abde also played 21 times for the B team in the RFEF First Division, finishing with three goals and seven assists.

His pace and wizardry on the ball have seen the 20-year-old attract plenty of interest.

Indeed, Osasuna and Real Betis are considering taking him on loan while Villarreal are planning an €8 million bid to sign him permanently.

However, as reported by SPORT, Barcelona have no intentions of selling Abde this summer despite the interest he is attracting.

The report claims that the Moroccan-Spanish winger will take part in the pre-season with the senior squad and could even be handed a first-team number for the upcoming campaign.

The only way that Abde could leave the club this summer is if Barça end up with too many options in the attacking unit which blocks his pathway.

In that case, the Catalans would consider sending the former Hercules CF starlet on a season-long loan.

But, as things stand, Barcelona are not contemplating the possibility of selling Abde thanks to the immense potential he has showcased in his short time at the club.