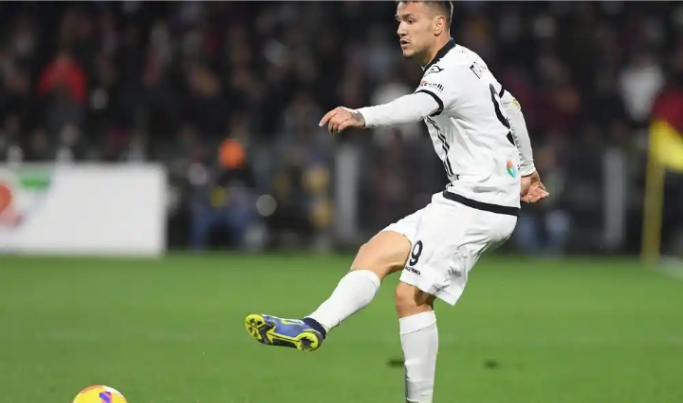 Among the host of players set to return to Barcelona after spending the last season away on loan, very few are likely to have a future at Camp Nou.

But one player is determined to change that situation and earn a place for himself in the first-team setup under Xavi Hernandez. And that is 25-year-old striker Rey Manaj.

Indeed, according to Mundo Deportivo, Manaj wishes to convince manager Xavi that he is deserving of a place in his plans for the upcoming campaign by making an impression in the pre-season.

Manaj was signed by Barcelona for their B team in January 2020 in a deal worth €700,000. The 25-year-old striker impressed for the subsidiaries, managing 16 goals in 31 matches.

He also made an impression in the pre-season last year as he emerged as Barcelona’s top scorer with four goals in 117 minutes of action under Ronald Koeman.

However, Manaj did not convince the Dutchman and was eventually loaned out to Italian club Spezia.

The Albanian international played 30 times for the Italians in Serie A last season and scored five goals. While his return was paltry, the striker caught the eye with his all-round gameplay.

Despite that Spezia will not be taking up the option to sign Manaj permanently for a fee of around €2.7 million.

Now set to return to Barça, the centre-forward is attracting interest from some clubs in Italy and Spain.

Barcelona are open to selling him or loaning him again with a mandatory purchase option.

However, there are no concrete proposals for him at the moment, which is why he could stay at the club for the pre-season.

And in that period, Manaj wants to convince Xavi that he is worth keeping around, despite the fact that

the Blaugrana already have plenty of attacking options and are also working to sign Robert Lewandowski.

Despite the forward’s intentions, it seems highly unlikely that Manaj will find a place at Barça for next season and an exit seems like the most possible outcome for him this summer.

Lewandowski is committed about taking Barcelona back to the top