With the 2021/22 season almost over, Barcelona will shortly start welcoming back players who had been out on loan for the campaign.

Most of the players who will be returning are unlikely to have a future at Camp Nou and could either be sold or sent out on another loan spell. And one such star who is expected to be quickly on the move in the summer is midfielder Miralem Pjanic. 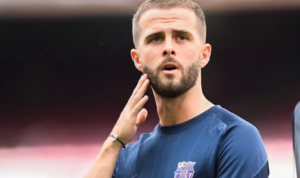 The 32-year-old Bosnian midfielder was shipped out to Besiktas last summer after enduring a difficult debut season in Catalonia upon arriving from Juventus in 2020.

The midfielder has had a solid campaign in Turkey, ending the campaign with 26 appearances in which he made four assists.

There had been talk about Besiktas wanting to extend the former AS Roma star’s loan spell by another season. However, wage issues are likely to prevent the Turkish giants from going ahead with the deal.

But, as per Catalunya Radio, Pjanic is now willing to take a pay cut in order to secure a loan move away from Barcelona in the summer transfer window.

The Catalan giants already have a plethora of midfield options, in the form of Sergio Busquets, Frenkie de Jong, Pedri, Gavi, Nico Gonzalez and Riqui Puig, while Franck Kessie is also set to be added to the roster.

In addition, Barça are also planning to bring in another midfielder with links to Ruben Neves of Wolves persisting. So, it is clear that Pjanic has now space whatsoever in the squad at Camp Nou.

A permanent move would be the ideal option for the Catalan giants as it would allow them to generate some funds from the sale. However, a loan departure looks the likelier of the possibilities, more so if the midfielder is willing to reduce his salary demands.