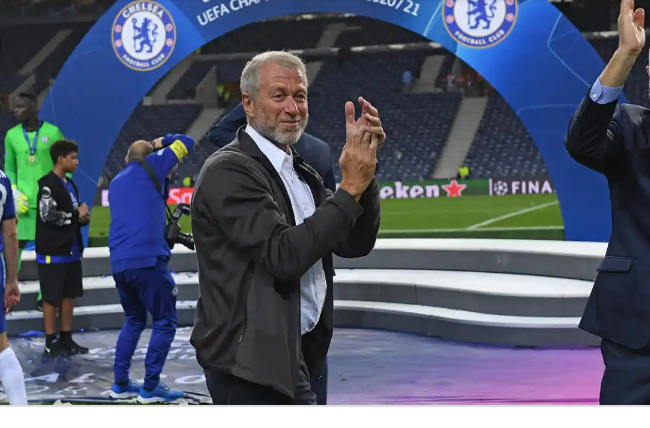 The 49-year-old, who is a lifelong Chelsea supporter, is understood to be working alongside a group of American investors in order to put a proposal together.

Abramovich, who bought Chelsea for £140 million in 2003, has set a £3bn asking price and is demanding that the new owners continue to invest in the squad.

It’s also understood that Abramovich wants Chelsea’s new owners to promise that they will redevelop Stamford Bridge, a project which would cost around £2.2bn.

When asked about his potential involvement in the deal, Candy told The Telegraph: ‘We are looking at what the art of the possible is.’

Candy also said that he has ‘spoken to most of the parties’ about putting an offer together for Chelsea.

A spokesperson for Candy also revealed that he would be willing to revamp Stamford Bridge: ‘The club deserves a world-class stadium – and Mr Candy’s unique expertise and background in real estate would be a hugely valuable asset to delivering this vision.’

A Swiss-American consortium, spearheaded by Swiss billionaire Hansjorg Wyss and US tycoon Todd Boehly, who owns parts of the Los Angeles Dodgers and Los Angeles Lakers, has already been submitted to New York-based bank Raine which is dealing with the sale on Abramovich’s behalf.

However, reports emerged on Wednesday that Abramovich is yet to be convinced about the offer, while more bids are expected in the coming days.

Speaking to Swiss newspaper Blick last month, Wyss said: ‘Abramovich is one of Putin’s closest advisers and friends. Like all other oligarchs, he is also in a state of panic.

‘Abramovich is trying to sell all his properties in England. He also wants to get rid of Chelsea quickly. I and three other people received an offer on Tuesday to buy Chelsea from Abramovich.’

Asked if he will take up the Russian on his offer, Wyss replied: ‘I have to wait four or five days now. Abramovich is currently asking far too much.

‘You know Chelsea owe him £2billion? But Chelsea has no money, which means that whoever buys Chelsea has to compensate Abramovich.’

‘I can well imagine starting at Chelsea with partners, but I have to examine the general conditions first.

‘But what I can say for sure is that I’m definitely not doing something like this alone. If I buy Chelsea, then it would be with a consortium consisting of six or seven investors.’