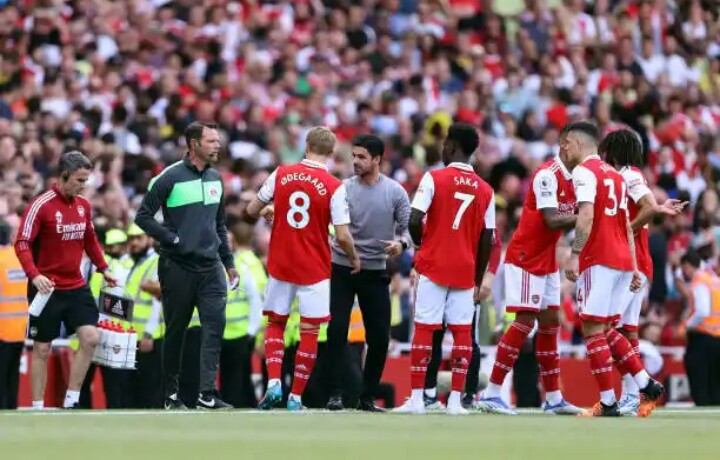 Mikel Arteta now must decide which players under contract at Arsenal for the 2022/23 season he should keep after opting against offering Alexandre Lacazette a new deal.

The Arsenal first-team squad ahead of the 2022/23 season is beginning to take shape following confirmation of Alexandre Lacazette’s imminent release and Mohamed Elneny’s contract extension.

After the final whistle blew in the Gunners’ final game of the 2021/22 campaign against Everton at the Emirates Stadium, attention immediately turned to the aforementioned duo as well as Eddie Nketiah as their futures needed to be resolved ahead of the summer transfer window.

At the time, all three players had entered the final month of their Arsenal contracts with Mikel Arteta revealing during his post-match press conference that ‘awkward’ decisions had already been made and they have since come to light with a double announcement over the past week.

Firstly, Elneny – who had been spotted by football.londonsigning a new contract following the 5-1 thrashing of the Toffees – could not hide his delight at officially putting pen to paper on a fresh one year deal with an option to extend. “I love this club and I feel like part of this family,” he told Arsenal Media. “I want to continue at this amazing club and amazing family and I’m very happy and very excited for the future.”

Then on the first Friday in June – 27 days before his contract was due to expire – it was announced that Lacazette will be departing the club at the end of the month. So after scoring 71 goals in 206 appearances across all competitions, the Frenchman’s five-year stay in north London is coming to a close.

As for Nketiah, recent reports suggest he is close to signing a new contract to be part of Arteta’s plans for the foreseeable future but until there’s an official announcement, he is the one Arsenal first-team player who is technically not confirmed to be under contract for next season.

With another busy summer transfer window for the Gunners on the horizon, it’s likely more players who are confirmed to be under contract with the club next season will be seeking pastures new with Bernd Leno, Nuno Tavares and Nicolas Pepe as well as several members of the loan army tipped to leave either on loan or permanently.

So with clarity over the futures of Elneny, Lacazette and Nketiah emerging since the end of last season, it will be interesting to discover who else Arteta has decided will be sold or kept on this summer. With that said, here’s a look at the first-team players still under contract for next season at Arsenal.

Arsenal first-team players under contract for 2022/23