Arsenal legend Emmanuel Petit has introduced his ex-team to Brighton attacker Alexis Mac Allister as he claims his addition will add depth to Mikel Arteta’s squad.

Saka remains the only senior player for the left flang in the attack and that could make Arteta and Edu listen to Petit to make a move in the January winter transfer window. 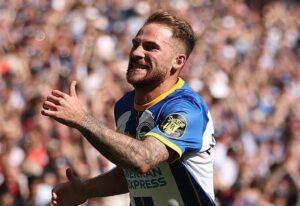 “If I were Edu, I’d make an offer for Alexis Mac Allister from Brighton, I really like him,” said Emmanuel Petit. Mac Allister has been playing in a slightly deeper role for the Seagulls this campaign, so his versatility could make him extremely useful for the Gunners if he was to join the London giants.

The 23-year-old attacker has scored six goals so far this campaign, and this sort of threat could make him a useful signing to Arsenal’s side, especially when he adds force with Bukayo Saka and Gabriel Jesus.

Meanwhile, a midfielder still remains top on the agenda of the North London outfit as the Gunners have observed their are short in that position following the injuries of Mohamed Elneny and Thomas Partey.