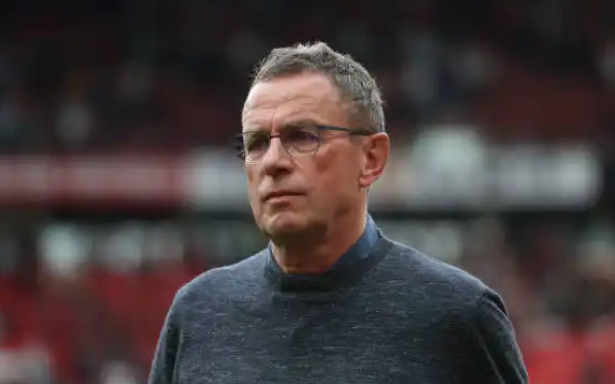 Ten Hag granted Rangnick only a phone call to discuss club matters after the German’s spell as interim coach concluded at the end of the season with Ten Hag taking the reigns on a permanent basis.

United subsequently confirmed that Rangnick was leaving the club and will not carry on in a consultancy role, as had been originally planned.

Rangnick was appointed as United’s interim coach in December on a deal until the end of the season but it had been agreed that he would continue at the club in a consultancy role for two years.

However, that plan has now been scrapped with ESPN reporting that his relationship with Ten Hag never took off and United signed a non-disclosure agreement with Rangnick upon his departure from the club.

It marked a clear break from the Dutchman from his predecessor, whose compulsory role had never been clearly defined by the club. Rangnick was said to have been greatly displeased that he was not granted a face-to-face meeting with Ten Hag.

The German’s interim role in charge of United was disastrous with six months of poor results and a series of off-field frictions appearing between him and many of the club’s players. Having taken charge of first-team affairs at the start of December, he failed to arrest the club’s alarming start to the season.

Ole Gunnar Solskjaer was sacked after a 4-1 loss at Watford and while caretaker boss Michael Carrick had appeared to steady the ship with wins over Villarreal and Arsenal alongside a draw at Arsenal, results deteriorated under Rangnick.

The interim boss won just 11 of his 29 matches in charge of the club with each of the side’s last six away matches in the Premier League ending in defeat.

Rangnick, 63, is now boss of the Austrian national team after leaving Old Trafford with his ties to the club cut permanently.

United confirmed via a statement last month: “We would like to thank Ralf Rangnick for his efforts as interim manager over the past six months.

“By mutual agreement, Ralf will now focus solely on his new role as manager of the Austria national team and will not therefore be taking up a consultancy role at Old Trafford. We would like to wish Ralf the best of luck in this next chapter of his career.”