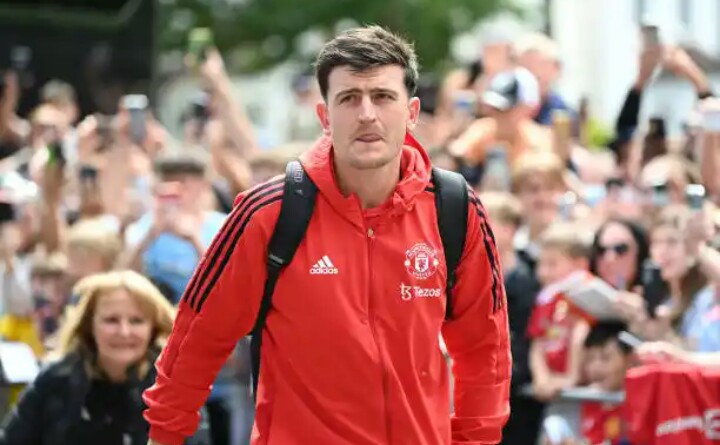 Erik ten Hag is in the process of analysing his Manchester United squad and skipper Harry Maguire faces a battle to retain his starting role with the Dutchman having doubts about his qualities.

Harry Maguire is not a guaranteed a starting role under Erik ten Hag at Manchester United, according to reports.

The Dutchman has arrived in the north west and addressed the press for the first time this week. He has a host of issues facing him at Old Trafford, both on and off the pitch, as he aims to turnaround the fortunes of the Premier League outfit.

Keeping goals out was a problem for United last term and Maguire has been central to their backline for the past three seasons having been signed by Ole Gunnar Solskjaer for big money.

Now though, with Ten Hag drawing his own conclusions on his players, the England defender is under threat.

The new boss in Manchester has doubts over Maguire’s ability to operate in a high defensive line given his lack of pace, which could cast doubt over his long-term involvement, reports ESPN. That will be magnified by United’s want to add another centre-half this summer..

Pau Torres at Villarreal was linked with a move to Old Trafford last summer but remained in Spain. He could now move on having again highlighted his quality as Villarreal made the last four of the Champions League. The LaLiga outfit would be open to selling were the right offer to come in.

Raphael Varane, Victor Lindelof are also options for Ten Hag whilst he has several young players to cast his eye over and decide on. The Dutchman refused to state whether Maguire would remain as captain, but did praise the 29-year-old.

He said: “I have to repeat that next season is a different season but I think he did a great job,” said the manager. “He’s a great player, he’s achieved already a lot really also [with his] contribution to Manchester United. So I’m looking forward to working with him.”

Maguire’s poor season dated back to the early weeks of the campaign. He’d played a starring role for England at Euro 2020, in which the Three Lions reached the final. However his early season form rang alarm bells among those at Old Trafford.

So much so that at least one senior player spoke to then boss Solskjaer about Maguire’s inclusion in the starting XI. Eric Bailly, who is expected to leave this summer with his minutes proving an issue, expressed his frustration that Maguire was selected for a defeat at Leicester City back in October with the defender being rushed back from injury.

Report: Xavi is not happy with La Masia duo’s lack of tactical understanding