Transfer expert Fabrizio Romano says Arsenal refused to pursue the signature of Mauro Icardi last summer because they had settled to make a move for Gabriel Jesus from Man City.

Icardi was offered to the Gunners because they had lost Pierre-Emerick Aubameyang and Alexandre Lacazette and needed a viable replacement. 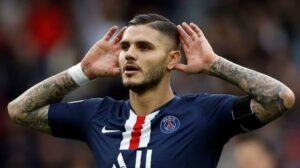 However, Gabriel Jesus joined for a fee of £45m and has been impressive with four goals in seven games. This adds to the fact that has helped the Gunners attack to be more ruthless.

Meanwhile, Icardi, who first joined the Ligue 1 champions PSG on loan from Serie A giants, Inter Milan in 2019 before the move was made permanent in 2020 would have been at Arsenal as well.

‘Arsenal have had many opportunities that they have turned down, but this happens in all the top clubs every day,’ Romano wrote in his column for Caught Offside.

‘For example, Mauro Icardi was an option offered to the club in recent months and it was decided not to proceed because they were looking for a different striker, Edu has always had Gabriel Jesus in mind as a priority.

‘Sometimes the refusal is for technical reasons, other times for economic reasons.’