“He was even struggling to walk” – Journalist provides worrying update on Arsenal star ahead of Premier League clash against Liverpool .

Journalist Charlie Watts has shared an update on Arsenal left-back Oleksandr Zinchenko after the Gunners’ 3-1 Premier League win over Tottenham Hotspur on October 1.Watts has said that the Ukrainian didn’t look too comfortable and could have cramped up. He reckons it isn’t a major injury but looked like cramps, which made it difficult for the player to walk properly. The Arsenal left-back was substituted in the 73rd minute by Kieran Tierney. 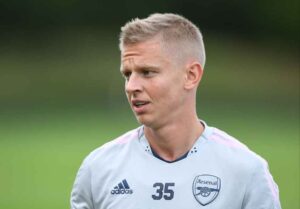 On his YouTube channel, Watts said (via This Is Futbol):

“We saw Zinchenko walk past – I say walk – he was even struggling to walk, and I’m not saying that was an injury or anything; it might have just been he was really cramping up.”

“He had both his legs sort of covered in… I don’t even know what they were they were; they were almost these sort of tights, basically, that I’m pretty sure were to keep the muscles protected, keep them warm or something like that. But he was very much struggling to walk; he was not moving well.”

Zinchenko was out before the north London derby due to a calf problem. He also missed a few games earlier in the season due to a knee issue. Watts believes it was not an injury but perhaps a lack of match fitness for the Arsenal summer signing.

Zinchenko joined Arsenal from Manchester City earlier this summer and has played six games across competitions. The Gunners will host Liverpool in the Premier League on Sunday (October 9) and will hope Zinchenko is fit for the clash.

In a pre-match press conference, manager Mikel Arteta sounded confident about his team’s preparations, especially with Martin Odegaard in his ranks. The Norwegian midfielder knows Bodo/Glimt well. thanks to his stint with Stromsgodset.Arteta said (via Arsenal.com):

“We’ve done our homework. Obviously, we have made the players aware of the team that we are facing tomorrow, the history and what they’ve done in the last few years, and we have Martin in the squad who knows them really well, and he’s done his homework in the dressing room to understand that tomorrow is going to be a tough game.”

The Gunners won their first Europa League game of the season when they beat FC Zurich 2-1. Their clash against PSV Eindhoven was postponed following the death of her Majesty Queen Elizabeth II last month.Arsenal are second in their group, one point behind Bodo/Glimt but have a game in hand.