“In winter we will see” – £43m-rated striker opens door open for possible Arsenal move. Shakhtar Donetsk forward Mykhaylo Mudryk has suggested that an offer to make a move to Arsenal in January would be too good to turn down.

The 21-year-old attacker emerged as a potential transfer target for the North London giants towards the end of the summer transfer window, however, a move to North London failed to materialise. 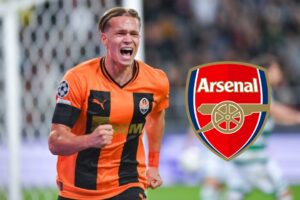 Mudryk has made a bright start to the new campaign and scored one goal and provided two assists in Shakhtar’s stunning 4-1 away win over RB Leipzig in their opening Champions League group game on Tuesday.

A recent report claimed that Shakhtar will only consider offers of at least €50m (£43m) for their wondekrid, who is regarded as a ‘potential star of the future’.

Speaking in an interview with CBS Sports, Mudrryk revealed how he came close to departing from the Ukrainian giants this summer.

“In winter we will see. There were a lot of discussions about a transfer, about clubs who want me, but it’s normal,” said the forward.

“I’m in Shakthar and I want to play in this team, I love every player in this team. Shakhtar for me right now is my home. For me it’s very important that all my thoughts [are on] Shakhtar, but in winter we will see.”

When asked whether he would like to play in the English top-tier, Mudryk added: “Yes. I think every guy dreams about the Premier League.”

Mudryk was also questioned about a potential move to the Emirates Stadium, and he replied: “Yes yes, it’s hard to say but Arsenal is a very good team. Very good coach, I like the way they play.”