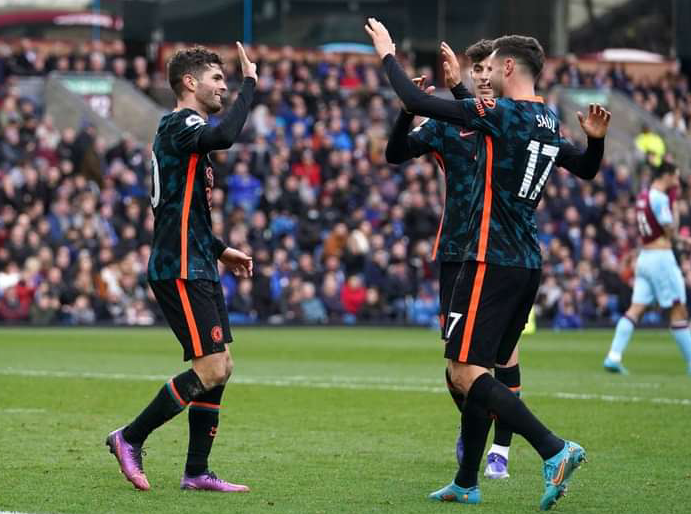 Chelsea hero Joe Cole does not think Saul Niguez is good enough to play as a wing-back.

Midfielder Saul occupied that position in Chelsea’s comprehensive 4-0 win over Burnley on Saturday.

Marcos Alonso and Callum Hudson-Odoi, who have filled in during Ben Chilwell’s absence, were both not in the match-day squad at Turf Moor.

Saul has found game time hard to come by since joining on loan from Atletico Madrid last summer.

He has spent the majority of his career as a central midfielder.

But he was used on occasion on the left-hand side by Diego Simeone.

Chelsea boss Thomas Tuchel has been reluctant to do so this season but his hand was forced on Saturday.

Speaking at half-time when the match was goalless, Cole hit out at the performance of the Spain international.

“Sean Dyche will be the happier of the managers,” Cole said on BT Sport Score.

“His 4-4-2 has worked very well, Aaron Lennon has got into the game, he’s doubled up.

“I don’t think Saul can play left wing-back in the Premier League.

“I think Tuchel’s got a job to do now, has to change it around.”

Cole claimed Burnley were the better of the two teams in the first half but were unable to make their pressure count.

He added: “Chelsea need to start dominating possession, pinning them back, because if they do that then Lennon and [Dwight] McNeil will end up playing full-back.

“The midfield of [Mason] Mount, Jorginho, [Christian] Pulisic haven’t got into the game enough because we haven’t controlled the game.

“Burnley, credit to them because they’ve worked hard, they’ve had the better chances. Burnley should be winning the game.”

However, the game turned on its head inside 10 minutes of the second half.

Reece James scored on his first start in 2022 before a Kai Havertz brace took the game away from Burnley. Pulisic added a fourth to add further gloss to the win.

It was Chelsea’s first league match since owner Roman Abramovich announced he would be selling the club.

Cole admitted the first-half display mirrored the uncertainty off the pitch.

“Obviously Roman stepping away as he has, it’s uncertain times,” Cole said.

“We don’t know the future and that filters down. It’s obviously secondary to what is going on but for the future of the club it’s just uncertain, the takeover’s going to happen and players contracts, it’s all up in the air.

“They’re actually playing like a team and a club that’s uncertain today. There isn’t much cohesion, they haven’t started well.”

Man United team news: Expected XI for Man City trip with Ronaldo and three others to miss out