The 24-years-old joined the Villans back in 2019 from Manchester City for a fee of around £15m. Since arriving at Villa Park, the midfielder has made 131 appearances in all competitions, scoring eight goals and registering seven assists. 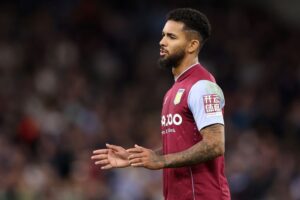 The Brazilian’s current contract will expire at the end of this season with Villa and it appears that the midfielder is highly unlikely to extend his stay at the West Midlands club beyond this campaign.

Arsenal were heavily linked with a move for the Brazil international in the summer transfer window, however, despite tabling several offers to sign the former Man City man on deadline day, Mikel Arteta’s side could not persuade Steven Gerrard’s side to sell the highly-rated midfielder.

Speaking on GiveMeSport, Simon Phillips has claimed that if Luiz leaves Aston Villa as a free agent at the end of this season then he will join Arsenal next summer. Chelsea could also look into this deal, however, the north London club is the most likely destination for the South American.

“The situation there if he does become a free agent, Chelsea will probably have a look at it. But I think he’ll end up joining Arsenal.”

The recently concluded transfer window saw Arsenal make five major acquisitions this summer and spend around £120m, however, they failed to add more options to their engine room.

Youri Tielemans was initially thought to be the priority target to bolster their midfield before the Gunners turned their attention towards Douglas Luiz. But, Mikel Arteta’s side could not broker a deal for either of them before the deadline.

Meanwhile, Albert Sambi Lokonga has done exceptionally well during the absence of Thomas Partey and Mohamed Elneny so far this campaign. So, the club’s failed mission of signing a new midfielder could be beneficial for the Belgian’s development as he will get more first-team opportunities this season.

Therefore, it will be interesting to see what Arsenal decide to do about their midfield department. Luiz and Tielemans will seemingly become free agents next summer and the Gunners shouldn’t turn down an opportunity of signing players of their qualities for free. So, Mikel Arteta’s side should go all out to get at least one of these deals over the line.