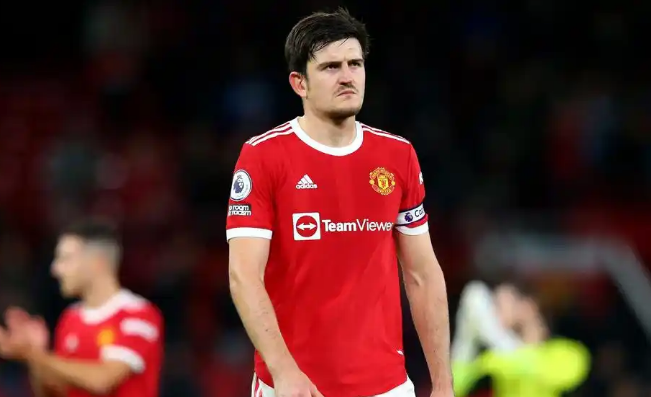 Harry Maguire is continuing to come under fire from the Manchester United dressing room.

The Old Trafford skipper’s struggles this season have been well-documented and his dip in form has been repeatedly scrutinised by his fellow teammates.

Mirror Sport revealed last month how Maguire and Cristiano Ronaldo are currently embroiled in a power struggle over the club captaincy with the centre-half in jeopardy of losing the armband.

And now several members of the Red Devils squad are privately questioning his continued place in Ralf Rangnick’s side, according to The Times, as they feel his performances are not meeting the club’s high standards.

The United camp’s grievances with Maguire have been bubbling under the surface since October after a hostile team meeting at Carrington after a 4-2 defeat by Leicester City.

The Times claims players ripped into each other and one of them questioned the club’s decision to make Maguire skipper just six months after arriving from Leicester.

Maguire’s representatives denied the incident occurred and those close to him say he takes the role as United captain seriously.

The centre-half recently agreed to come in on a day off to talk to staff in a Q&A session.

There is a growing belief within the Old Trafford dressing-room that Ronaldo will replace Maguire as skipper, however, with the Portugal star taking on a more authoritative role.

Rangnick has asked Ronaldo to mentor the younger players within the squad, which has the England defender feeling undermined by the 37-year-old’s influence at the club.

Maguire thinks some of the players are losing respect for him as his control within the changing room has diminished.

Ronaldo has positioned himself as the one setting the example for Jadon Sancho, Scott McTominay and Marcus Rashford, but this has been seen as a threat to Maguire’s captaincy.

Rangnick has continually defended United’s skipper dismissing claims there will be a change of captaincy mid-season.

He said last month: “Harry was injured. He came back and had a good game against West Ham and I am pretty sure he can play at the same kind of level.

“The way we are playing now is new to him, also because in the English national team he is used to playing in a back three and here at Manchester United in a back four, but still not being as proactive with that kind of defence when we try and be on the front foot trying to defend.

“This is something new to him and it will take some time for him to get used to that and adjust to that. He is our captain and I don’t see any reason to change that. He is also a player who has to develop and get better like all the other players.”