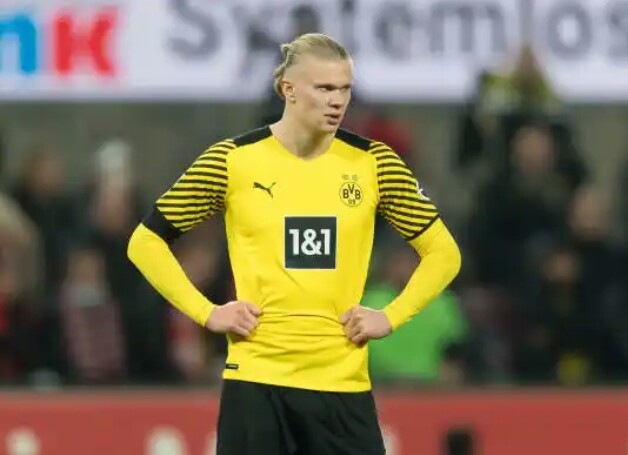 Man United and Chelsea were involved in talks over a deal to sign Erling Haaland earlier in the season, according to reports.

But it’s now Man City and Real Madrid who are in pole position to sign the Norway international. Borussia Dortmund are bracing themselves for a potential exit, with the 21-year-old one of the hottest prospects in world football.

Manchester United had hoped to sign Haaland from Red Bull Salzburg back in the January transfer window of 2020.

However, they ultimately ended up missing out to Borussia Dortmund with the Red Devils unhappy at the financial demands of the striker’s controversial agent, Mino Raiola.

In recent weeks and months, amid a troublesome season for United, talk of them potentially signing Haaland has died down.

Yet Sport say they were involved in conversations with the striker’s entourage earlier in the campaign.

Chelsea had designs on landing the 21-year-old back in the summer, with Thomas Tuchel a huge admirer.

Yet when it became clear Dortmund wouldn’t cash in on their prized asset, the Blues then proceeded to spend nearly £100million on Romelu Lukaku instead.

Chelsea’s current situation means it’s hard to imagine them landing Haaland at the end of the campaign, like United.

And both teams are now lagging behind Real Madrid and City when it comes to snaring the striker, who has scored 16 goals from 18 Bundesliga games this term.

But they’re eyeing Haaland, too, and it’s feasible the duo will move to the Bernabeu and play alongside Karim Benzema up top.

Yet they’re now focused on Haaland instead, with the Dortmund star available for a fee close to £66million due to a clause in his contract.

City boss Pep Guardiola was recently asked about Haaland – but he made it clear he didn’t want to discuss the matter.

“Since I am here, every month or two months people say we are going to sign 50 players,” Guardiola said recently.

“Right now, listen, It’s impossible that I am going to talk about some guy who is not here.

“He’s a Dortmund player and we’ve an incredible run ahead of us.

“At the end of the season it is the transfer window and many things are going to happen.

“Maybe I speak about this club needing a striker for the next five, six, seven years, maybe once in the last 12 months.

“I’m not going to be the guy saying we are a success or not a success because we didn’t have a striker.

“We have to play good and arrive with seven or eight players in the box. This is the best way to score goals.”

Haaland said in January that things would ‘start to happen’ now revolving his future, with Dortmund resigned to losing their star striker.

“The last six months I have chosen not to say anything out of respect for Dortmund, but now the club has started to press me into making a decision,” he said.

“All I want to do is play football.

“But they press me… about my future, so that means I have to make a decision soon.”

Related Topics:ChelseaManchester United
Up Next