Manchester United have announced the departure of Spanish midfielder Juan Mata after eight and a half years at the club.

Mata signed for Manchester United from Chelsea in 2014, and was a regular during his early years at the club. In the last few years, Mata has struggled to cement a regular place in the team, and with his contract expiring this year, it became increasingly likely that he would leave the club.

Now, Manchester United have officially announced Mata will be leaving the club on a free transfer. 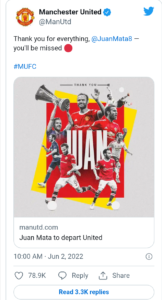 At 34-years-old, the Spanish midfielder has struggled with the pace of the game in the last few seasons. The modern English game is heavily focused on fast-paced, high pressing football, so a move abroad might be Mata’s best option.

The addition of Bruno Fernandes has also limited Mata’s game time, with the Portuguese star playing in a similar position to him.

According to Fichajes, Real Betis, Real Sociedad, and Valencia are all interested in signing the attacking midfielder, so a return to Spain could be on the cards for the Spanish international.