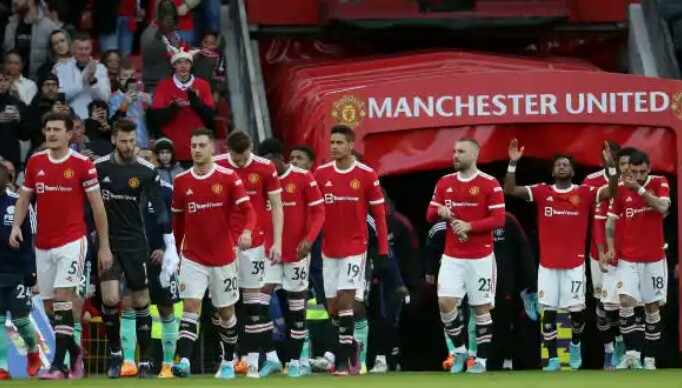 Man United laboured to a 1-1 draw with Leicester City at Old Trafford to effectively kill off their hopes of clinching a top-four finish.

Both sides struggled to make many inroads during a poor first half, with United in particular struggling to move the ball around with any type of conviction. But the game burst into life after Kelechi Iheanacho broke the deadlock on the hour mark, heading home after a rapid counter-attack from the visitors.

Fred was in the right place at the right time to stab home the equaliser for the hosts just four minutes later. James Maddison thought he’d won the game for Leicester in the 80th minute, only for VAR to rule his strike out for a foul. The result leaves United needing a miracle to qualify for next season’s Champions League; particularly with Arsenal and Tottenham finding form in recent weeks.

Here, Express Sport takes a look at five things we learned on another difficult afternoon for Manchester United and Rangnick at Old Trafford…

Ever since joining Manchester United, Fred has struggled to win over his critics; but his resurgence this season has been nothing short of remarkable. The Brazilian midfielder has evolved into a key player for United, and he was in the right place at the right time to bag his fourth league goal of the season to give United hope.

He could hardly have picked a more fitting way to mark his 100th Premier League appearance for the club – even if he didn’t come out on the winning side. Rather than looking the most likely candidate to make way for a big-money midfield signing, the vastly improved 28-year-old now looks like the most likely candidate to star alongside whoever does arrive ahead of next year.

Not for the first time in recent weeks, Rangnick has taken a page out of Manchester City’s playbook by opting to set United up with a false nine rather than a recognised focal point. But once again – just as it did when United were mauled by their rivals last month – the system proved to be of a hindrance than a masterstroke.

United were laborious in their build-up play and completely toothless in the final third as Bruno Fernandes and Paul Pogba alternated in the advanced role in the absence of Cristiano Ronaldo. While Pep Guardiola and City have excelled without a focal point this season, it should be abundantly clear that isn’t a suitable tactic for Rangnick to persevere with if United do harbour any faint hopes of pipping Arsenal to the final Champions League berth.

With Ronaldo ruled out of Saturday’s clash, Marcus Rashford was the most obvious candidate to fill in for Manchester United’s Portuguese talisman – but Rangnick made his feelings on the United academy graduate crystal clear by leaving the misfiring 24-year-old on the bench again.

Although it was clear before Saturday’s clash that Rashford was out of favour at Old Trafford, Rangnick’s decision to start without an orthodox striker for the second time in just over a month underlined just how much work United’s academy graduate has ahead of him if he is to salvage his Manchester United career – weeks after Rangnick backed him to rekindle his form.