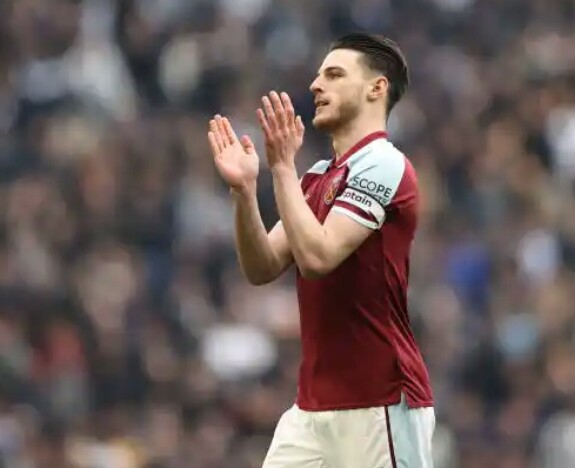 Man United have been told that West Ham ace Declan Rice can be their new Roy Keane as the midfielder continues to go from strength-to-strength for club and country. And the Red Devils could even make the ace their top summer target.

Rice starred for England on Tuesday night as the Three Lions defeated Ivory Coast 3-0 at Wembley. And United icon Paul Ince says the 23-year-old’s qualities are reminiscent of Keane’s. “I think he’s a wonderful player,” Ince said after England’s victory.

“He’s got leadership qualities. Even the way he talks in interviews, you can see he has desires to be one of the best players in the world. You can see his game developing at West Ham. He’s now driving with the ball, making things happen. We talk about the [Steven] Gerrards, Keanes – box-to-box players. This kid is on the same level.

“Give him time because he’s playing as a holding midfield player. I’ve played 20 years in that role and never had licence to go forward. If he can add a few goals to his game, you’re talking about a very, very special player.”

Keane is regarded as one of United’s greatest ever players and captained the Red Devils during one of their most successful periods ever.

But he has already stated that Rice is ahead of where he was at the same age. “I think Declan’s improved as much as any player over the last one or two seasons,” Keane said in September. “I know he’s been linked with Man United and, if you’d have asked me a year or two ago, I would have thought give him another year or two in terms of maturing.

United have a whole host of issues to fix this summer and are in desperate need of a goalscorer who can lead the line for years to come as the futures of veterans Cristiano Ronaldo and Edinson Cavani are up in the air.

But the club also have defensive frailties. And Rice is a player who can make an impact at both ends of the pitch thanks to his tackling abilities, incredible range of passing and driving runs.

So club chiefs may just decide the Hammers midfielder is the number one priority come the end of the season.

Manchester United, Arsenal, and Chelsea set to battle it out for Atletico Madrid forward

Manchester United, Arsenal, and Chelsea are all set to battle it out for Atletico Madrid forward Joao Felix.

Felix has endured a difficult start to the season for Atletico and is yet to score in five starts in the league.

Last season wasn’t much better for Felix, only managing 24 league starts.
With competition up top including French international Antoine Griezmann, Felix is often used as a rotation option under Diego Simeone.

Now, according to Fichajes, a move to the Premier League could be on the cards, with Manchester United, Chelsea, and Arsenal all interested in signing the striker.

Both Manchester United and Chelsea will need to find a long-term replacement for their current first-choice strikers.

Cristiano Ronaldo and Pierre-Emerick Aubameyang are both reaching the latter stage of their careers for their respective clubs, so bringing a player with a similar age profile to Felix would be a smart move.

A move to Arsenal may not benefit Felix’s development as much, with Gabriel Jesus performing exceptionally well for the North London club and still only 25 years old.

Manchester United and fellow Premier League clubs are counting down the days until they can strike-up further business in the transfer market. Erik ten Hag welcomed six players to Old Trafford during his first window and they have all made their mark in the starting XI.

Martin Dubravka was the other recruit, signing on a season-long loan from Newcastle.

With one eye on January and future windows, meanwhile, United are understood to still have Frenkie de Jong on their radar, while elite clubs from across Europe will be queuing up for Jude Bellingham should he decided to leave Bundesliga side Borussia Dortmund in the near transfer window.
Continue Reading

Jude Bellingham shined yet again last night for Borussia Dortmund on the Champions League stage, which received some interesting reaction from a Chelsea perspective.

England star Bellingham, 19, scored in Dortmund’s 1-1 draw against Sevilla. It means the teenage midfielder has now scored in all four Champions League group stage matches so far this season

There were some interesting replies in the comment section, especially from two current Chelsea stars.

“Another day at the office”, Reece James posted.

Carney Chukwuemeka added: “So, so good”.

Bellingham plays alongside plenty of Chelsea stars on the international stage with England, so let’s hope they can put in a good word to try tempt him to the Bridge.

He’s an all – action central midfielder that offers so much both offensively and defensively.