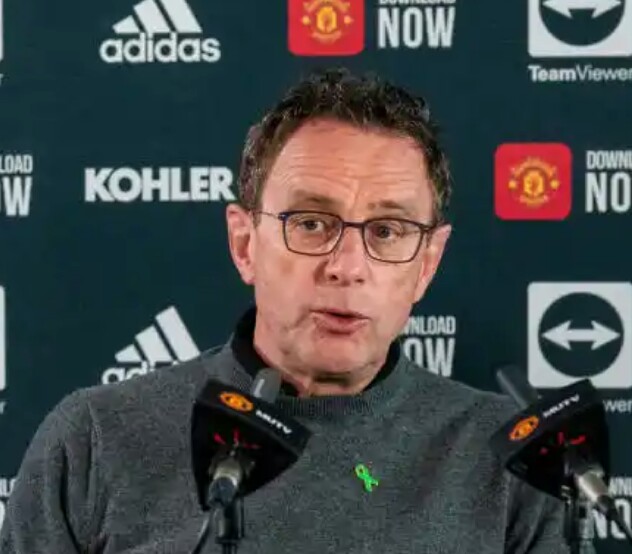 Man United are set for a summer of transition with a new manager and flurry of signings expected, but Ralf Rangnick has warned it could take some time for their changes to take effect

Ralf Rangnick has warned the Manchester United board it could take up to three transfer windows before they can rival Manchester City and Liverpool, after outlining his four-point plan to help the club return to top of English football.

The German watched on as his side squandered the chance to close the gap to top-four rivals Arsenal after a 1-1 draw with Leicester on Saturday — their third home draw in five games.

The Gunners, who have two games in hand, will move six points clear if they beat Crystal Palace on Monday evening, which could bring an end to Man United’s hopes of securing Champions League qualification.

United were knocked out of the competition by Atletico Madrid in March, confirming they will finish the campaign without a trophy for the fifth consecutive season since their Europa League triumph in May 2017.

That is despite spending £120million last summer to bring in Cristiano Ronaldo, Jadon Sancho and Raphael Varane.

While Rangnick may have been responsible for some of their below-par performances and results, the 63-year-old believes there is an inherent lack of identity within the club.

And the former RB Leipzig coach has provided recommendations to improve their fortunes on and off the pitch, including following the path of their rivals Liverpool and Man City.

According to The Telegraph, Rangnick has outlined his vision which includes: signing players that fit their new manager’s philosophy, recruiting aggressive and physical footballers after recognising United are “too soft”, profiling a player’s DNA and taking a patient approach to transfers, with three transfer windows needed to catch up to their rivals.

The first step in United’s plan will be to appoint a new manager, with Erik ten Hag and Mauricio Pochettino believed to be the frontrunners.

Ten Hag, who has won two Eredivisie titles in four years at Ajax, is understood to be Rangnick’s favoured choice and reportedly has a verbal agreement to leave the Dutch giants if United make an approach.

In explaining his theory, Rangnick pointed to how Liverpool and Man City have grown over the past five years operating under a similar model with Jurgen Klopp and Pep Guardiola respectively: “Man City and Liverpool … have been built together and recruited over a period of five or six years – all of them under the premise of how the coaches want to play,” Rangnick said.

“I told the board this is what has to happen [at United]. Whenever the new head coach is clear, it has to be: how does he want to play and what kind of players do we need for that? Then we come back to DNA, speed, physicality, tempo. What do we need? This team does not lack technical players, it can do with more physicality.

“It takes right decisions and [clarity over] where you want to go: what kind of players, want kind of manager and then, in every transfer window, try to get the best possible. This is rocket science. It has to be done and, if that happens, it does not necessarily need three or four years. Maybe in two or three transfer windows, then the situation could be different.”