Federico Valverde lifted the Champions League trophy with Real Madrid back in May – but the Uruguayan playmaker’s career almost took a very different path.

Valverde has made a big impact since his arrival at the Bernabeu back in 2016 and has gone on to establish himself as one of Europe’s top midfielders. 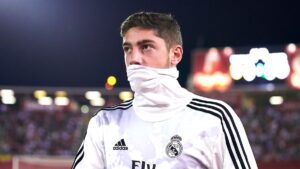 The 24-year-old featured in all but two of Real Madrid’s Champions League matches last term as the Spanish giants clinched an unprecedented 14th European crown under the guidance of Carlo Ancelotti. However, Valverde was heavily courted by Arsenal at a very young age – and he was even on the cusp of joining the Premier League giants after ‘shaking hands’ on a switch.

According to AS, Valverde was recommended to Arsenal’s legendary former boss, Arsene Wenger, by his scout Francis Cagigao. And the midfielder and his agent even travelled to London in December 2014 after the Gunners had reached a ‘verbal agreement’ with prodigious talent.

There were also suggestions at the time that Valverde had trained with the Arsenal first team after being shown around the club’s London Colney training base.

However, the Londoners ultimately decided against firming up their interest in Valverde and failed to table a concrete bid – a stance that has since come back to bite them.

Valverde went on to bag seven goals for Uruguay in the South American U17 Championship not long after the move collapsed. Arsenal did rekindle their interest in the wake of his impressive tournament, but Valverde had also caught the eye of Real Madrid, who swooped in to sign him from Penarol for just €5million (£4.45m).

The playmaker has gone from strength to strength since then and has chalked up over 150 games for Real. His impressive form for Los Blancos piqued the interest of Liverpool, who were linked with a blockbuster move for the midfielder earlier this summer.

Valverde has been in sizzling form for Real so far this season, netting four times in nine games. And Ancelotti underlined just how highly he rates the midfielder earlier this month – although he did stress that Valverde needs to improve his output.

Speaking after Real’s 2-0 win over RB Leipzig, Ancelotti quipped: “I told Valverde that if he didn’t score at least 10 goals this season, I will tear up my coaching license and leave.”

He added on Valverde’s lack of goals: “What was strange last year was that he only scored one goal, in the Super Cup I think. Tonight he took the shot with his left foot. I’ve never seen him shoot like that with his left, so it shows he’s confident in his abilities, and he has a lot of abilities.

“He’s more than just energy. But, to say he’s best in the world in his position, we might have to wait a little longer.”