PSV Eindhoven forward to Arsenal is a transfer rumour that keeps coming back. 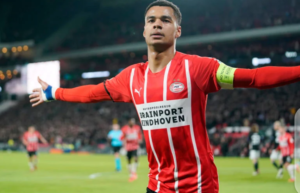 The trail went relatively cold but now there’s been a promising update.

According to Caught Offside, the Gunners are in ‘early’ talks with the 23-year-old about coming to North London during the summer transfer window.

The player won the Eredivisie’s Golden Shoe last season for a stunning campaign, netting 21 goals and setting up another 15 across all competitions.

Even if it’s only the Netherlands’ top flight, 36 goal involvements is one heck of a return, a real demonstration of his attacking ability.

However, Caught Offside has also reported that Arsenal manager Mikel Arteta has asked about using the player as a left-back, due to Kieran Tierney’s injury struggles over the past three years since joining from Celtic.

You wonder if that could harm the Emirates Stadium outfit’s chances of signing the player.

Remember, this is a team who have just failed to finish in the Champions League qualification places, having been major favourite to seal a return to the top four in the Premier League toward the end of the term.

That won’t have helped Arsenal’s attempts to sign anyone this summer, but tweaking the position of somebody so devastating is hardly going to be making Gakpo book a first flight to London, either.

Of course, it may not be true that Arteta is interested in using him as a left-back, but it does have some credibility.

As mentioned, Tierney’s injury record is chequered to say the least and with Nuno Tavares proving himself a relatively poor understudy to the Scotland international last season – his first in the Premier League – well the Spanish manager is definitely right to want another left-back.

Whether that’s Gakpo, though, is another thing.