Almost a month ago, Erik ten Hag, was unveiled as the new Manchester United manager and he is still waiting for his first signing.

As per the latest reports going on in the media, the Dutch manager is pressing the Red Devils to seal two stellar signings for just £80million.

According to The Sunday Mirror (press image provided below), Ten Hag’s vision for Man Utd will be in tatters if the Old Trafford outfit are unable to sign Frenkie de Jong and Christian Eriksen. 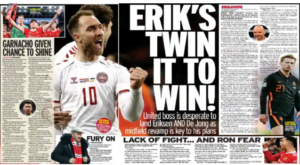 The Danish international is available on a bosman, on the other hand, the Dutch international is going to cost around £80million. United’s initial offer of £60million was turned down by Barcelona and the former Ajax manager is frustrated.

The 20-time English champions believe that they are being held to ransom by the financially troubled Spanish side but the 52-year-old coach thinks that De Jong will be worth every penny.

Ten hag agrees that by splashing £80million, United will be paying a premium for the 25-year-old midfielder but insists that the club will be getting two stellar stars for the price of just one because Eriksen can join for free.

Both players rose to fame at Ajax and the manager wants to implement the Dutch champions’ philosophy at Old Trafford.

At the Nou Camp, the Netherlands midfielder has not been able to perform at his best because in his preferred position, Barca have mainly utilized Sergio Busquests.

On the other hand, Eriksen proved his worth in the Premier League with Spurs. Moreover, he impressed for Brentford last term after returning to football post heart operation.

He started 10 games in the second half of the campaign for the Bees and directly contributed in 5 goals. In March, he returned to feature for Denmark and scored against the Netherlands and Serbia.

The 30-year-old is also on the radar of Tottenham and unlike United, the north Londoners can offer him Champions League football next season.