The Manchester Evening News claim that Manchester United made an enquiry to sign Tottenham talent Dane Scarlett, before he signed a new deal. Spurs announced his new contract this week, until June 2026.

Scarlett, 18, is thought of highly at Spurs and has been a regular part of the matchday squad – both under Nuno Espirito Santo and Antonio Conte. He clocked up seven senior appearances for Tottenham during 2021-22. 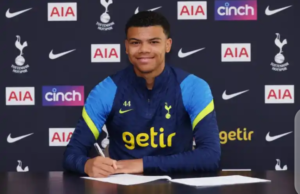 It would have been a surprise move on all fronts. Tottenham had no reason to sell, and London-born Scarlett would hardly have wanted to leave his boyhood club – or his birthplace. It would not have improved his game time.

Also, why would Tottenham want to allow a direct rival for the top four to potentially strengthen themselves in years to come? A surprise move from United, especially considering he has “blown away” Antonio Conte.

Indeed, common sense has prevailed and Tottenham have Scarlett’s future under wraps. He is likely to become a part of the first team in the coming months, with more games on offer. That is, unless Spurs sign a striker.