If reports in the Spanish media are anything to go by then Manchester United have moved in with a bid to sign Raphinha from Leeds United.

According to a story covered by Sport today (news image provided below), former Chelsea player, Deco, has received multiple phone calls from the Red Devils asking about the winger’s situation and his willingness to move to Old Trafford. 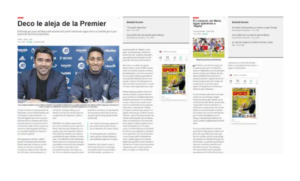 The retired Samba star has made it clear that the Brazilian winger, who is wanted by several Premier League sides, is heading to Barcelona.

Despite having big offers on the table, Deco has promised Joan Laporta and Mateu Alemany that his client will wait for the La Liga giants to improve the economic situation.

The famous Spanish media outlet have mentioned that Man Utd have submitted a bid, that is beyond Barca’s reach, and they have offered huge terms, that the Catalan club cannot afford, in order to sign Raphinha,

However, for now, his representative has been able to stop the onslaught of the Red Devils and other Premier League sides. He is consistently pushing to take the 25-year-old, who is valued at £55.7million, to the Nou Camp.

Man Utd have decided to offload attackers like Mata and Lingard, on the other hand, Martial’s future is up in the air and Greenwood is unavailable. Therefore the offense must be improved.

Raphinha can play in multiple attacking positions and has proven his quality in the Premier League but Leeds United might not want to sell their prized asset to bitter rivals, Man United.