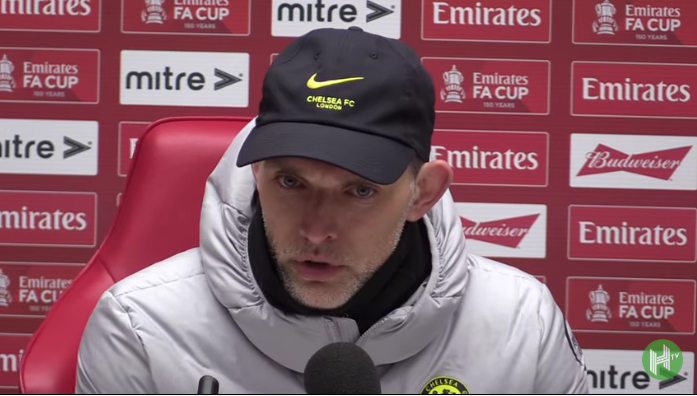 Thomas Tuchel has told Chelsea to deliver “what makes us strong” in Tuesday’s Champions League clash at Real Madrid.

The Blues boss hailed his side for rediscovering their poise in Saturday’s 6-0 Premier League thumping of Southampton.

Chelsea lost their Champions League quarter-final first leg 3-1 to Real on Wednesday, after being humbled 4-1 by Brentford the previous weekend.

Tuchel delivered a tough-talking squad address on Thursday, and that sparked Saturday’s rout at Southampton.

Chelsea’s German coach declared their Champions League quarter-final all-but over after Wednesday’s Real loss, but now wants his side to throw everything at Tuesday’s Bernabeu return leg.

Asked if a potent performance at Southampton can boost the Blues’ chances in Madrid, Tuchel replied: “It was necessary that we turned things around but we came from a long streak of games, then we had the international break and we had five days afterwards where we didn’t feel the same.

“So it was not a huge turnaround, it was not necessary to change everything, but it was the moment for us, I had the feeling, to tell the group the truth, my honest opinion, and tell them as a part of the group this is how I feel.

“And so the message was clear, and obviously everybody took it in the right way, I included myself in the message, and so it was necessary to step up.

“It is on the players to live up to what we play and they did it in an impressive manner.

“So it’s now a time to move on because we’ve found what makes us strong and it was another proof of that and we keep on going.”

In one week Chelsea have leaked seven goals but scored eight across two defeats and one win.

Tuchel will hope his players are back to their aggressive, tenacious best after Timo Werner and Mason Mount grabbed braces, with Marcos Alonso and Kai Havertz also on target at Southampton.

Asked what a madcap string of three matches can teach Chelsea, Tuchel replied: “I think it tells us that we are not the team that can escape with results if our input is at 90 per cent or 80 per cent of our energy, commitment and investment.

“We are a special group when we have the priorities right.

“If we are committed, if we defend with courage, if we have the attitude right and the hunger right and win challenges.

“If we have the priorities clear, this is our foundation to then show the quality.

“Then we are a strong group and a special group of players who have a right to believe in ourselves.

“There is nothing to be ashamed of, but we are not the fancy group that comes with a priority of quality and see if we can get away with an 80 per cent or 90 per cent investment and commitment in all aspects of the game. This is what it tells me.

“If we have it right, we can show our quality – because we have the quality.

“It’s what makes us a dangerous and special group.”